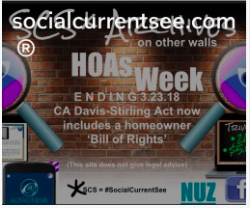 Re: California Davis-Stirling Law ▶ Google ▶ Amazon ▶ Slideshow ▶ PDFIf you live in a common interest development, aka homeowners association (HOA), as most are doing in the Temescal Valley (and some 9 million throughout California), you should have a reference to the DAVIS-STIRLING LAW (DSL). ▶ This site does not give legal advice

▶ PRIVACY STATEMENT  ▶ http://docdro.id/aEwMoct
Under DSL, a developer of a common interest development is able to create a homeowner association (HOA) to govern the development. As part of creating the HOA, the developer records a document known as the Declaration of Covenants, Conditions, and Restrictions (CC&Rs) against the units or parcels within the HOA with the county recorder. So, first and foremost, the HOA is an invention for real estate developers and a consequence for homeowners who buy into HOAs. Even though it is not a governmental entity, but a private business, the HOA operates like an “alternate city” (ALTACITIES) in many respects. As recognized by the Supreme Court of California, the Declaration of CC&Rs is the constitution of the HOA and is legally binding upon residents to the extent that it does not conflict with state or federal law. CC&Rs, once properly recorded, are presumed valid until proven otherwise. The California Courts of Appeal have explained the quasi-governmental nature of the HOA. More at the links below: Re: California Davis-Stirling Law ▶ Google | https://goo.gl/x7iC4x ▶ Amazon | https://amzn.to/2uotqk3 ▶ Slideshow | http://bit.ly/2udL9KN ▶ PDF | http://docdro.id/LkQsN9Z ▶ ALTACITIES | http://altacities.com
▶ MAGAZINE ALTA♥CITIES | http://flip.it/rV6uO1 NOTE ▶ At this time, not a single one of the online renditions of the DSL includes the so-called homeowner’s BILL OF RIGHTS or CA Senate Bill 407 that became law on September 11, 2017. LINK to PDF ▶ http://docdro.id/ct7XV96

One of the most prolific and industry-trusted sources for governance information about common interest developments or homeowner associations (HOAs) is the Honorable Lawrence Stirling who (you guessed right) was the half-sponsor of the California Davis-Stirling Act (DSA).

Because of that credibility on matters HOA, I have asked at his site for his opinion on the following new law, a recently enacted preamble for the DSA. 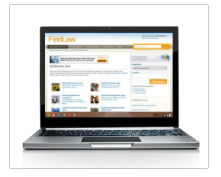 At the closing of the 2017 California Legislature session the second week of September, one of the oblique (meaning little-observed) and almost anonymous laws that was passed and signed by Governor Brown had the title that is noted above and is now archived in the following post.  One week later, almost nothing about this story appears in the public press.  A Google search barely mentions the topic.

The subject of the law is a homeowners Bill of Rights for the some 9 million residents of common interest developments, aka homeowner associations (HOAs), some 45,000 different communities in the state.

Since the new HOA law essentially becomes a preamble for the state code that governs HOAs, the law known since 1985 as the Davis-Stirling Act (see video link below), one might wonder why this so-called "Bill of Rights" had not been considered before.  Due to the existence of the USA Constitutional Bill of Rights, why did it take 32 years for our state lawmaker to take up the idea of a "bill of rights" for homeowners who are essentially living in private governmental communities that have no accountability beyond the geographical limits of those areas. 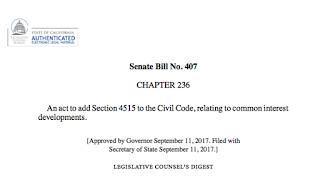 PDF
What about HOA petitions?

Re: (4) Canvassing and petitioning the members, the association board, and residents for the activities described in paragraphs (1) and (2) at reasonable hours and in a reasonable manner.

If you have heard negative comments from HOA board leaders about petitions, line #4 of the new Bill of Rights may be welcome.  Question is:  How do you create and manage a petition?

First, note that the Davis-Stirling Law (PDF link) has numerous references to petitions, but it is virtually silent on the process of homeowner petitions to the board.  Probably, that is due to the fact that the original draft (1985) and the revisions (2013) of the law did not include the Bill of Rights, nor did the law recognize this process.

Homeowners may ask for their HOA policy ad procedure for creating, drafting, and submitting petitions, but this, too, may not exist.

To help with this, here are some sources to consider: 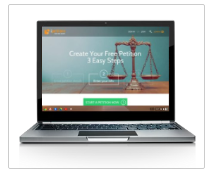 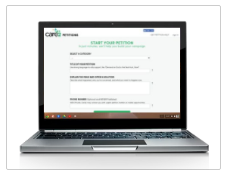