WORTHY ▶ B R E A K I N G  N E W S from Parkland, Fla. ▶ “I am a freshman at Marjory Stoneman Douglas High School in Parkland, Fla. In the days since the attack that killed 17 people here, I have continued replaying those terrifying moments in my head.

“It began when a fire alarm went off just before school was supposed to end. We thought nothing of it. People in my finance class had already left, and I grabbed my backpack to evacuate. The next thing I knew I heard people running and shouting, and my teacher yelling at us to get back in the class.”  ▶ SEARCH THIS STORY ▶ NUZZEL THIS 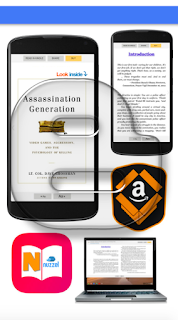 ▶ Amazon eXNG ▶ REVIEW ▶ SHOP
The author of the 400,000-copy bestseller On Killing reveals how violent video games have ushered in a new era of mass homicide--and what we must do about it.

Paducah, Kentucky, 1997: a 14-year-old boy shoots eight students in a prayer circle at his school. Littleton, Colorado, 1999: two high school seniors kill a teacher, twelve other students, and then themselves. Utoya, Norway, 2011: a political extremist shoots and kills sixty-nine participants in a youth summer camp. Newtown, Connecticut, 2012: a troubled 20-year-old man kills 20 children and six adults at the elementary school he once attended.

What links these and other horrific acts of mass murder? A young person's obsession with video games that teach to kill.

Lt. Col. Dave Grossman, who in his perennial bestseller On Killing revealed that most of us are not "natural born killers" - and who has spent decades training soldiers, police, and others who keep us secure to overcome the intrinsic human resistance to harming others and to use firearms responsibly when necessary - turns a laser focus on the threat posed to our society by violent video games.

Drawing on crime statistics, cutting-edge social research, and scientific studies of the teenage brain, Col. Grossman shows how video games that depict antisocial, misanthropic, casually savage behavior can warp the mind - with potentially deadly results. His book will become the focus of a new national conversation about video games and the epidemic of mass murders that they have unleashed.