ALTACITIES®, an acronym for "ALTERNATE CITIES"
▶ Flip2▶ CANSWERIST® via @flipboard - clips and content for those who relate as cancer survivors or caregivers for same
▶
Today's tweets are tomorrow's posts ...
"When you change the way you look at things, the things you look at change"
▶ @altaloman® ▶ altacities®
▶
#SocialCurrentSee in http://nuzzel.com/ALTALOMAN
▶ SLIDESHOW ▶ PDF ▶
Check out CANSWERIST® by socialcurrentsee.com ® ▶ http://flip.it/YFLFK2 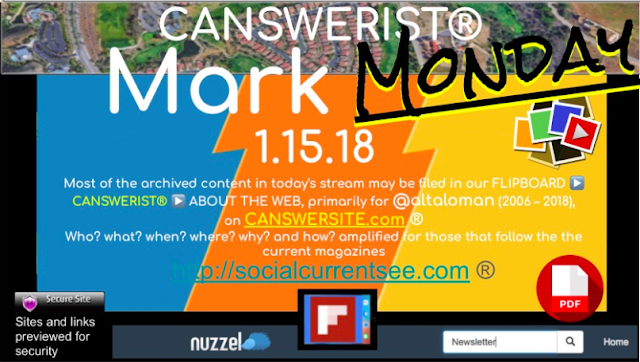 ▶ PDF ▶
Nuzzel offers personalized news discovery and curated newsletters for busy professionals, via web, mobile apps, messaging bots, and email newsletters.
▶ That's why top influencers in media, technology, and finance use Nuzzel to save time and stay informed.
▶ In 2016, Nuzzel was named one of the "Best Apps of 2016" by the Google Play Store, one of "The Year's Best Apps" by the New York Times, and one of the "Best Apps of The Year" by Time Magazine.
▶ Nuzzel apps have been featured by both the Apple App Store and the Google Play Store, and Nuzzel was one of the first technology partners of the AMP project led by Google.
▶ Nuzzel, Inc. is headquartered in San Francisco, CA.
Flip②▶SOCIAL CURRENT SEE ® (SCS) by Mike & Dee Dee Foxworth aka ALTALOMAN, mobile web concierge, archivist, synergist, curator and microblogger INtrepreneur ... retired from hospital fund development and a cancer survivor since 2006 Flip②▶ http://altacities.com  ▶ http://socialcurrentsee.com  ▶ http://canswerist.com ▶ http://leavetheword.com ▶http://triology.tv

The gallery of slides here serve to archive Martin Luther King Day, a national holiday in the USA and the “ides” of January bring millions in the USA to a mid-winter point when the bitter cold is getting old and unwelcomed any longer.  Not true for us in Southern California where we continue to enjoy sunny or partly-cloudy skies with temperatures generally in the 80s.  However, we had some serious rains last week for the first time in a long while. Almost makes me want to apologize to all of my family and friends who live in the regions of the “frozen chosen.”  Thankfully, warmer days are coming which prompts me to recall that we are only a few weeks away from the opening of MLB Spring Training.

Now that I have allowed this interruption of the intended topic of this Mark ★ Monday post, let’s move on to the topic of the day...

According to this source, Martin Luther King Jr. (born Michael King Jr., January 15, 1929 – April 4, 1968) was an American Baptist minister and activist who became the most visible spokesperson and leader in the civil rights movement. He is best known for his role in the advancement of civil rights using the tactics of nonviolence and civil disobedience based on his Christian beliefs and inspired by the nonviolent activism of Mahatma Gandhi.

King became a civil rights activist early in his career. He led the 1955 Montgomery bus boycott and helped found the Southern Christian Leadership Conference (SCLC) in 1957, serving as its first president. With the SCLC, he led an unsuccessful 1962 struggle against segregation in Albany, Georgia, and helped organize the 1963 nonviolent protests in Birmingham, Alabama. He also helped to organize the 1963 March on Washington, where he delivered his famous "I Have a Dream" speech.


In his own words ▶ Amazon eXNG