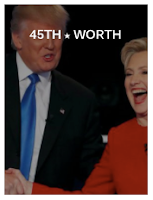 ▶ By the way, the content following the Twitter Moment here is intended to give readers a welcome break from all the negativity of Campaign2016.  Enjoy!