The story, as told by Nancy Flanders: "Doctors told her to abort, but she refused and experienced a miracle, when Kimberly Smith was just 19 years old, she was already the mother to one little boy, and she had discovered she was expecting her second little boy named Phillip. She was a bit stressed out, having recently suffered the loss of her younger brother, but nonetheless, she was happily awaiting the birth of her new baby. However, about halfway through, her normal pregnancy took a drastic turn that would leave her questioning whether or not to abort her baby." 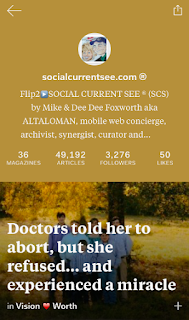 
#SocialCurrentSee: The Twitter @Storify clip posted here is based on the hashtag #Mercy, a broad term that refers to benevolence, forgiveness and kindness in a variety of ethical, religious, social and legal contexts. The concept of a "Merciful God" appears in various religions, including Christianity, Judaism and Islam and is a social media moniker not uncommonly searched in #ALTACITIES to add to the stories and content found in

▶ As noted before on this site, #ALTACITIES is the web moniker designed to archive matters relating to common interest developments (aka HOAs), or communities that the creator and archivist likes to call "alternate cities."  Now retired since 2010 (Dee Dee since some five years before), we are #BabyBoomers of 1947 and 1948 and, as such, our perspective on #SocialCurrentSee may be the same, but possibly different than many readers of this blog.