"Last week, as workers took down some of the final construction fences from around One World Trade Center and five trucks full of office furniture arrived, the question wasn’t so much how the $3.2 billion project could save downtown New York, but whether it could bring it up another level." ~ Jonathan O’Connell / The Washington Post 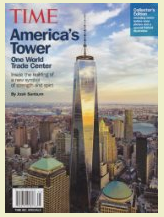 'Although I've viewed a few documentaries on this amazing reconstruction over the years this story is brought together in a very comprehensible composition in this presentation. It is a great story of resolve culminating in a project that is a living monument for all Americans to be proud. Further, it's a lasting documentation of the collaboration, strength and bravery of all who played a part in this mammoth undertaking." ~ L. Young